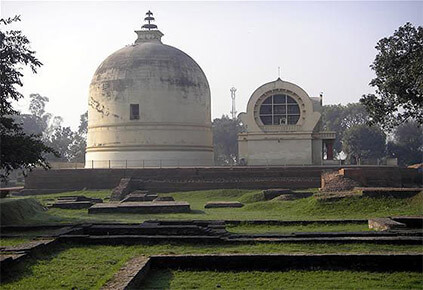 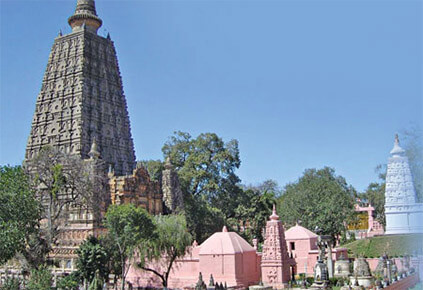 Meet and assist by our representative upon your arrival at the airport. Then drive to your hotel with your driver and car.

Early morning transfer to railway station to board your train to Lucknow. On arrival at Lucknow, drive to Srawasti where Lord Buddha spent 24 rainy seasons in Jetvana Gardens. Another attraction at Srawasti is the Ananda Bodhi Tree believed to be the one planted by Anand the main disciple of Buddha.

After breakfast proceed for a short tour of Srawasti which will include a visit to Maheth - covering an area of about 400 acres. Excavations have exposed the massive gates of the city, ramparts and also the ruins of other structures, which stand testimony to the prosperity of ancient Srawasti. The Sobhanath Temple is located here. Pakki Kuti and Kacchi Kuti were probably Buddhist shrines, before they were converted into Brahmanical temples. Later continue to Lumbini 27 km beyond Indo – Nepal Border.

Reach Lumbini and relax at the hotel.

After breakfast proceed for a half day tour of Lumbini. Visit the sacred garden - spread at a area of over 8 sq km it possesses all the treasures of the historic area. There are many temples, Monasteries & Stupas built by various countries. Ashoka pillar carrying an inscription identifying the holy site as the birthplace is situated nearby the Sacred Garden. Mayadevi Temple houses a bas relief depicting the nativity. Recent excavations have turned up a stone bearing a "foot imprint", indicating the exact place of birth. Puskarni pond is where Queen Mayadevi, the Buddha's mother, had taken a bath before giving birth to Buddha. Later drive to Kushinagar and check into your hotel.

After breakfast drive to Patna. En-route visit Vaishali, which is 55 kms from Patna. Vaishali was thrice visited by Lord Buddha and the scene of the second great Buddhist council and it long remained a strong hold of Buddhism. Arrive Patna and check into hotel for overnight stay.

The ruins of the world’s earliest known university can be seen in Nalanda. Today the university is in complete ruins as in the 12th century the Muslim invader had plundered the rich library and burnt down the texts and this served as a death knell to Buddhism in India. Continue towards Rajgir a short distance away (15km). Rajgir was once the ancient capital of the powerful kingdom of Maghada. From the out skirts of Rajgir, a historic road leads to Gridhakuta or vultures peak where the Buddha preached, here the first Buddhist Council was held after the Lord's Mahaparinirvana. Overnight will be in Boudhgaya.

After breakfast at hotel, enjoy a sightseeing tour of Boudhgaya. Visit the sacred Mahabodhi Temple – where the Buddha attained enlightenment under a Bodhi Tree after years of search for the truth and knowledge. In the afternoon, sightseeing tour of Boudhgaya visiting Niranjana River, Sujata Village and the Beautiful Monasteries. Later in the evening, visit the Mahabodhi Temple for prayer.

Overnight stay will be Boudhgaya.

Early in the morning (0500hrs) we take you to banks of the river Ganges where we board a boat to see the morning ablutions of the Hindus from the security of our boat. The boat ride starts from Dasashwamedh Ghat and ends at Manikarnika Ghat along the sacred Ganges.

Varanasi is the world’s most ancient city and the home of Hinduism. The sunrise on the riverfront is spiritually uplifting as seen from the boat, crowded with temples and people and its labirynth of streets. It was earlier called Kashi. The present name is derived from the fact that it is at the confluence of the two rivers Varuna and Assi that flows across the city.

See the Kashi Vishwanath temple and the Gyanvyapi Kund and the mosque attached to it. Also visit the Benares Hindu University the largest residential university in India with more than 3000 residential students

Later proceed to visit Sarnath where Buddha preached his first sermon to his first disciples. Also visit the nearby ruins of the erstwhile university of the Buddhist era.

Transfer to airport to board your flight for Delhi. On arrival in Delhi, check into your hotel and relax.

Morning after breakfast a full day city tour of this imperial British capital of the 20th century awaits you. Visit the Qutub Minar – the tallest free standing minaret in stone in the world; then onto Humayun's tomb – the first Mughal construction in India from 1565 AD. Also see the Rashtrapati Bhawan, the India gate built in the earlier half of the 20th century. Drive through the old city past the Red Fort and visit the Jama Masjid – the biggest of its kind in India. Here take a rickshaw through the winding streets of the old city to see the life of the people in this part of the world. A perfect introduction of your tour with the rickshaw puller pulls you through, the imperial avenue of the yesteryears, the Chandni Chowk.

Finally, reach Rajghat, the memorial of Mahatma Gandhi, where your car and chauffeur is waiting for you to take you to your next stop the Birla Mandir, a Hindu temple in activity.

Later transfer to International airport to board your flight back home....