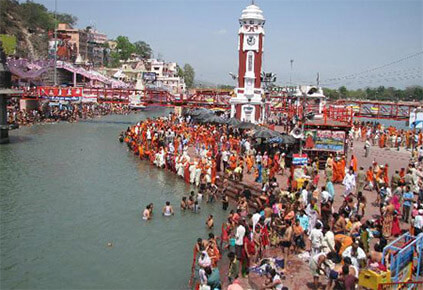 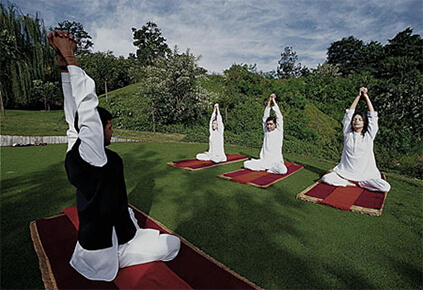 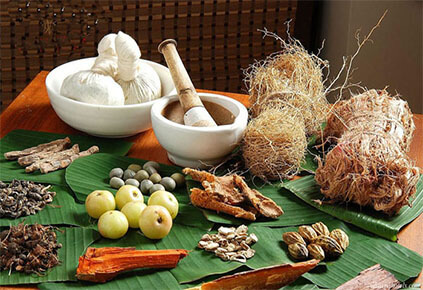 Distant India Journeys representative will meet you on arrival at the International airport. Transfer to your hotel. Relax.
DELHI, the capital of kingdoms and empires is now a sprawling metropolis with a fascinating blend of the past and the present. Delhi is a perfect introduction to the composite culture of an ancient land and a window to the kaleidoscope - that is India.

Early morning transfer to railway station to board your train for Haridwar. On arrival in Haridwar, drive to Ananda. Reach Ananda and check into your hotel.

Take a therapy bath with oils and herbs or just get instructed to do Yoga and meditation.

Ayurveda is a 4000 year young system, unlike modern medicines which is 400 years old. The Ayurveda system of medicine aims at not just curing disease but also maintaining health. Hence it advocates a life of physical, mental and spiritual discipline. Another Ayurvedic belief is that we are an integral part of nature. And any disease that materializes in our body has a solution in nature. Ayurveda believes in the innate abilities of nature and the body to cure itself. Medicines are drawn from nature—herbs and plants, animal and mineral products—which detoxify and gel with the natural substances of the human body.
The treatment is prescribed by a physician based on the patients' state of health gauging by the status of the doshas - can be in stages, sometimes of longer duration. Depending upon the nature and intensity of the disease the treatment involves either medicines or oil baths and massages or a combination of both.

Another theory of Ayurveda is that certain passages or minutest channels of the human body has to be cleansed regularly through processes like emesis [vamana] , purgation [virechana], oil - predominant enema [snehavasti] , decoction - predominant enema [ niruhavasti ] and nasal medication [ nasya]. Panchakarma is the Ayurvedic terminology for this fivefold purificatory process which involves repeated application of oil and heat therapy in tandem with certain internal medication. Panchakarma rejuvenates the body and mind to its potential.

Rediscover tranquillity at Ananda in the Himalayas, a world class destination spa set in the former residence of Maharaja of Tehri-Garhwal. Swirled in the sacred mists of time, this luxurious India hotel is dedicated to the modern traveller who is looking for innovative ways to restore and rejuvenate his energies. Achieve a holistic balance of mental wellbeing and physical vigor, all amid a stunning natural and architectural setting of this unparalleled hotel in India.

Allow the Spa at Ananda to take you on a unique holistic journey that combines pure indulgence, complete well being and total rejuvenation of the mind, body and soul through a combination of wellness packages. Your personal journey is designed to transport you to a place where tension, fatigue and stress melt away, leaving you with renewed balance and inner calm. Our packages are designed to cleanse, balance, enhance, soothe and energise. We invite you to experience a moment of calm and your own personal space… the best journeys in life are, after all, eventually to yourself.

Ananda Spa approach is contained in the saying "Swastha Jeevan Sandhya", meaning "healthy lifestyle approach with assistance”. Guests benefit from this by a private consultation from a Lifestyle Assistant offering professional guidance and individual attention. Various Options are available from an innovative Spa menu of treatments and services that integrate ancient & contemporary therapies and treatments from various disciplines to suit individual needs and requirements.

Today you will be dropped to Haridwar Railway station to board your evening train to Delhi. On arrival in Delhi at 2245hrs, you will be transferred to your hotel in Delhi. Overnight will be in Delhi.

Start a full day sightseeing of Delhi at 0930hrs

A sightseeing tour of Old Delhi would entail visiting the Raj Ghat   - the memorial site where Mahatma Gandhi was cremated; Jama Masjid - the largest mosque in India and the Red Fort - once the most opulent fort and palace of the Moghul Empire.

An extensive sightseeing tour of New Delhi would include a visit to the Humayun’s Tomb, the Qutub Minar, a drive along the ceremonial avenue - Rajpath, past the imposing India Gate, Parliament House, the President’s Residence, and Lotus Temple and would end with a drive through the Diplomatic Enclave.

Later transfer to International airport to board your flight back home......