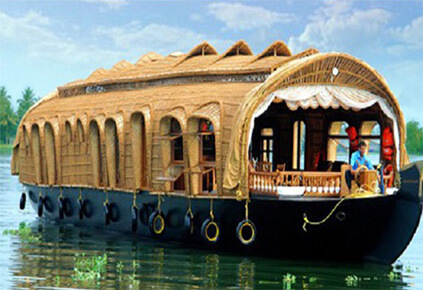 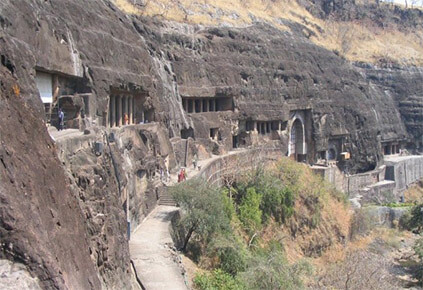 This tour gives you an opportunity to experience the hustle bustle of Mumbai along with peaceful and calm atmosphere in Kerala.

India is a wonderful place that has been blessed with a vast exquisite coastline, offering memorable experiences to the visitors that flock the country in huge number all around the year. South India with Mumbai & Aurangabad tour is an amazing amalgam of pristine beaches, splendid architectural wonders, serene lakes and backwaters, exotic heritage site. This tour includes the major attractions of India including Mumbai, Ajanta & Ellora Caves, Cochin, Alleppey, Periyar and Madurai.

Distant India Journeys representatives will receive you on arrival at the international airport in Mumbai late in the night or midnight. Transfer to your hotel. Relax.

Mumbai is the capital of Maharashtra and one of the busiest and sprawling metropolises of India with a fascinating blend of the past and the present.

Overnight will be at Mumbai.

Mumbai with its lively and a confluence of varied cultural currents and cross currents have given it a unique position of the most multi-ethnic city of India. Proceed for a city tour with your car and driver.

The area north of Colaba is known as Mumbai Fort, since the old British fort was once located here. There are a lot of impressive buildings from Mumbai's golden period here. St. John's church, dedicated to the soldiers, who laid down their lives in the Sindh campaign of 1838, and the first Afghan war of 1843, is also worth a visit.

Marine Drive in Mumbai: Marine Drive located in the central Mumbai, built in the 1920s and 30s on land reclaimed from the sea, is Mumbai's most famous thoroughfare. It is also referred to as the Queen's Necklace because of the dramatic line of street lamps lit up at night. Recently it has come to known as Netaji Subhashchandra Bose Road with Nariman Point on one end to Babulnath at the foot of Walkeshwar on the other.

Gateway of India: Mumbai's principal landmark, the Gateway of India is a huge archway on the water's edge at Apollo Bunder. It is the starting point for most tourists who want to explore the city. This famous monument was built to commemorate the visit of the first ever British Monarch, King George V and Queen Mary in 1911.

Chowpatty beach situated at the end of Marine Drive has a moderate expanse of sand and is the only beach in the central part of Mumbai. One can witnesses many Hindu religious ceremonies taking place at Chowpatty like the Annual Thread-Tying Ceremony initiating young boys into the Brahmin caste, 'Nariel Purnima' towards the end of the monsoons and 'Ganesh Chaturthi' immersions.

Flora Fountain: This fountain situated in the heart of the city was erected in 1869 in honour of a British Governor of Bombay. Sir Brtle Frere. Flora Fountain marks a junction of five streets and known as the 'Picadilly Circus 'of Mumbai, which is decorated at its four corners with mythological figures, the Fountain is a structure in dull stone with a figure the Roman Goddess of flowers, at the top.

Juhu Beach: Juhu is one of the largest and frequently visited beaches of India. Located 18-km north of the city centre, it's a beckoning beach on the shores of Arabian Sea and is one of the posh localities of Mumbai where one can find the bungalows of the famous film personalities. Many shootings are held here too.

Hanging Gardens in Mumbai: Also known as Pherozeshah Mehta Gardens, the Hanging Gardens were built in 1880 and renovated in 1921. These gardens are popularly known as Hanging Gardens, because of their location on the slope of a hill. The terrace garden looks south from Malabar Hill towards Colaba, and affords a panoramic view of the city or a breathtaking sunset. It is built over three reservoirs, which store 30 million gallons of water pumped here for cleaning before being supplied to the town.

In time, transfer to the airport for your flight to Cochin.

Upon your arrival at Cochin, you will be met and assisted at the airport by the representative of Distant India Journeys and transfer to your hotel.

In the afternoon proceed for a city tour and a boat cruise especially reserved by Distant India Journeys to give its customers that out of the world feeling. Vasco Da Gama Square, the narrow promenade that parallels the beach, is the best place to watch the nets being lowered and pulled out of the sea.

After breakfast proceed for a city tour of Cochin.

A few interesting sites included in the tour are the Chinese fishing nets along the Vasco Da Gama Square, Santa Cruz Basilica, St. Francis Church, VOC Gate, Bastion Bungalow etc. Apart from these architectural splendours, an array of restaurants serving fresh seafood is also popular among tourists. The Chinese fishing nets erected on teak wood and bamboo poles work on the principle of balance. Records say they were first set up here between AD 1350 and 1450.Leave Cochin in the morning after breakfast and proceed towards Alleppey (Venice of the East) en route visit Kuttanad. "Kuttanad" is one of few places in the world where farming is done below sea level. Kuttanad is a land of lush paddy fields and is called the 'Rice Bowl' of Kerala. Kuttanad stretches for 75 km sandwiched between the sea and the hills. Proceed to Alleppey. Alleppey or Alappuzha is famous for its boat races, houseboats, coir products, fishes of different varieties and lakes. Check into a traditional houseboat and go on a leisurely backwater cruise along the lake on a thatched houseboat. The houseboat with all modern comforts lets you discover the countryside at your own pace. You will have lunch, dinner and breakfast in the houseboat. A ride on the houseboat is a fabulous way to explore the fascinating beauty of the backwaters. For more information on houseboat cruise please ask the representative of Distant India Journeys local office.

Overnight will be on board House Boat.

After breakfast leave for Periyar. Reach and check into your resort hotel. In the afternoon enjoy boating through Periyar Lake inside the wildlife sanctuary. You can visit the rare species of plants and animals.

Also visit spice plantations like cardamom, cinnamon, pepper, coffee, tea estates etc. on your way back to the hotel; you could stop at the local market and pick up some fragrant spices. Evening is at leisure to relax.

Morning breakfast at the hotel. Proceed towards Madurai. Arrive and check in to your hotel in the city. Afternoon visit this unique temple town of south India. See the Sri Meenakshi temple built in the Dravidian style of temple architecture.

In time transfer to the airport for your flight to Mumbai. Upon arrival check into a hotel near the airport.

After breakfast, transfer to the airport for your flight to Aurangabad. Upon arrival in Aurangabad, transfer to the hotel. After a brief stay and rest leave for a combined city tour of Aurangabad covering the major attractions of the city like Panchakki and Bibi ka Maqbara.

Also worth a visit are the Aurangabad caves. The almost forgotten caves of Aurangabad lie just outside the city. Excavated between the 2nd and 6th century AD, they reflect TANTRIC influences in their iconography and architectural designs. In all there are nine caves which are mainly viharas (monasteries).

The most interesting among these are Caves 3 and 7. The former is supported on 12 highly ornate columns and has sculptures depicting scenes from the legendary 'Jataka' tales. Cave 7 with its detailed figures of bejewelled women also has a dominating sculpture of a 'Bodhisattva' praying for deliverance.

Proceed for a full day sightseeing with excursion to Ajanta Caves.

Nestling in an inner fold of the Sahyadri hills, 100 km from Aurangabad in the shape of a mammoth horse- shoe, are the 30 rock-hewn caves of Ajanta. The Caves date from the 2nd century BC. Discovered in 1819 by a group of British army officers, these startling achievements took around 600 years to create. Carved with little more than a hammer and chisel, Ajanta, was once the retreat of Buddhist monastic orders features several 'Chaityas' (chapels) and 'viharas' (monasteries). The exquisite wall and ceiling paintings, panels and sculptures of Buddha's life are famous throughout the world as the earliest and finest examples of Buddhist pictorial art.

Proceed for a visit to the Ellora Caves.

Impressive in their own right is the rock-hewn temples and monasteries of Ellora that lie just 30 km away from Aurangabad city. In all, there are 34 cave temples, 12 Mahayana Buddhist caves (550-750 AD), 17 Hindu caves (600-875 AD) and 5 caves of the Jain faith (800-1000 AD) 22 more caves, dedicated to Lord Shiva, were recently discovered. Kailas Temple (cave16), the central attraction at Ellora, is the most remarkable. Chiselled by hand from a single massive rock, it includes a gateway, pavilion, courtyard, vestibule, sanctum, sanctorum and tower which bear testimony to the excellence of Dravidian art. It is believed to have taken 7000 labourers, working in continuous shifts and 150 years to build. Ever since the first European visitors in 18th Century, Ellora has attracted chroniclers, antiquarians, scholars and in more recent years, ever- increasing number of tourists.

After breakfast proceed for an excursion to Daulatabad Fort. Once known as 'Devgiri', this magnificent 12th century fortress stands on a hill just 13 km. from Aurangabad. It was given the name Daulatabad, the 'city of fortune', by Muhammad Tughlaq, Sultan of Delhi. Initially a Yadav stronghold, it passed through the hands of several dynasties in the Deccan. One of the world's best preserved fort of medieval times, surviving virtually unaltered, Daulatabad yet displays the character that made it invincible.

This is a Fortress that was conquered only by treachery. A series of secret, quizzical, subterranean passages lie coiled like a python amidst the fort. Here flaring torches were thrust upon an unwary enemy. Or hot oil poured down his path, as he deliberated in the labyrinth. Also the heat from a brazier was blown into the passage by a process of suction suffocating the entire garrison within. The Fort itself lies in the body of an isolated hill; the steep hill - sides at the base falling so sharply to the moat that no hostile troops could scale the height.

The moat, 40 ft. deep with mechanical drawbridges teemed with crocodiles. A 5-kilometer sturdy wall, artificial scarping and a complicated series of defences made Daulatabad impregnable. The 30-meter high Chand Minar (Tower) built much later with 3 circular galleries had a defensive and religious role in the fortress.

In time proceed towards the airport to take a flight to Mumbai. On arrival in Mumbai, check into your hotel and relax.

Mumbai with its lively and a confluence of varied cultural currents and cross currents have given it a unique position of the most multi-ethnic city of India. The capital city of Maharashtra State formerly known as Bombay lies in the south-western part of India and occupies a peninsular site originally composed of seven islets lying off the KONKAN COAST of western India. Oozing with the cocksure self-confidence of a maverick money maker and "Bindass" (carefree) attitude, Mumbai is also country's financial and commercial hub and has a principal port on the Arabian Sea. Yet, there's another face of Mumbai too that is of the most densely populated cities in the world. Mumbai is located on a site of ancient settlement and took its name from the local Goddess "Mumba" - a form of Parvati, the consort of Shiva, one of the principal Gods of Hinduism - whose temple once stood in what is now the south-eastern section of the Mumbai city.

Transfer to airport to board your flight for next destination...