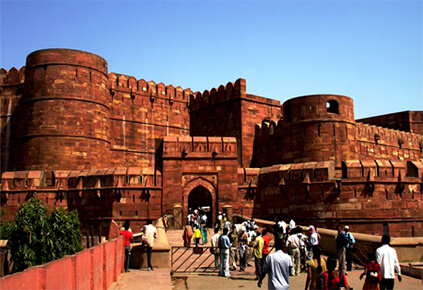 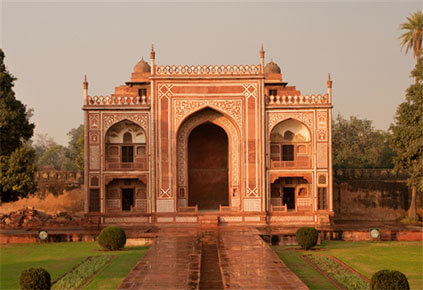 Destination Covered: Agra (Drive from Delhi to Agra & Back)

Taj Mahal is world's greatest monument of love situated in Agra city. Agra is a city on the banks of the river Yamuna in the northern state of Uttar Pradesh, India.

07:00 hrs: Early morning pick from the International Airport or from your hotel in Delhi and drive towards Agra located at a distance of 185 kms through Yamuna X-pressway.

Meeting and assistance on arrival at Agra and proceed for your Guided Tour of Agra City by first visiting The Monument of Love – Taj Mahal (closed on Friday).

Taj Mahal:  Taj Mahal, a white marble mausoleum was built by Mughal emperor Shah Jahan in memory of his third wife, Mumtaz Mahal. The Taj Mahal is widely recognized as "the jewel of Muslim art in India and one of the universally admired masterpieces of the world's heritage".

Taj Mahal is regarded by many as the finest example of Mughal architecture, a style that combines elements from Islamic, Persian, Ottoman Turkish and Indian architectural styles.

In 1983, the Taj Mahal became a UNESCO World Heritage Site. While the white domed marble mausoleum is the most familiar component of the Taj Mahal, it is actually an integrated complex of structures. The construction began around 1632 and was completed around 1653, employing thousands of artisans and craftsmen.

Arjuman Banu the niece of Nur Jahan, at the age of 21 married Shan Jahan and took on the name that has passed through time: Mumtaz Mahal. When she died, Shah Jahan was grief stricken and vowed to build her a memorial surpassing anything the world had ever seen in beauty and in the wild extravagance. He brought in skilled craftsmen from Persia, turkey, France and Italy. He put a huge army of 20,000 laborers to work. The work ended on the exact anniversary of Mumtaz Mahal's death. Glimpsed from the enormous main gateway inscribed with verses of the Koran (the entire Koran is said to be reproduced on its walls), the Taj Mahal reveals with the suddenness of a jewel box opening before your eyes.

After visiting Taj Mahal proceed for the Venue for Lunch and enjoy your delicious Lunch waiting for you.

After Lunch, proceed for the Visit of Agra Fort.

Agra Fort - Ever since Babur defeated and killed Ibrahim Lodi at Panipat in 1526, Agra played an important center of Mughal Empire. Akbar chose this city on the bank of River Yamuna as his capital and proceeded to build a strong citadel for the purpose. It is said that he destroyed the damaged old fort of Agra for the purpose and raised this grand group of monuments instead in red sandstone. Started in 1565, it took eight years and thirty-five lakh rupees (3.5 million) to complete its construction and is second only to Taj in Agra.

It’s time for shopping now…..You will have plenty of time to buy a souvenir for your friends and Family….

After completing your city tour of Agra City, drive back to Delhi via express highway and then drop back at the International airport or your designated place of stay.

Tour Price doesn’t include: Any hotel accommodation, Entrance fee to monuments, Camera fee, Tips to driver / guide / Representative, anything not mentioned in “tour price include” list.

*Tour Price is based on minimum 2 persons traveling together